The Main Difference: Bees sting you at once while wasps, yellow jackets and hornets sting your multiple times.

Physical Difference: They all are small creature having same physical structure result but act in different ways. 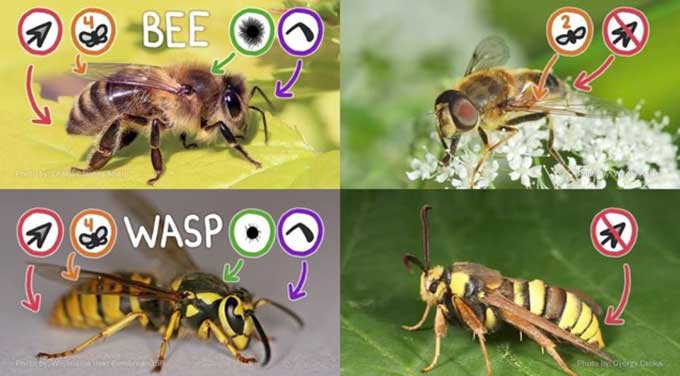 Usually, in summer, these insects hovering around in houses for searching place to live and to make burrows to lay eggs and deposit pollen as food for the larvae. Such insects are attracted to yards, plants, trees, and dry places. These insects can’t eat anything.

They are likely to live far away from humans in their colonies. But most of them like wasps and yellow jackets likely to live nearer to humans and mostly they nested on house roofs. Their sting is more painful and can cause allergies.

Let me tell you in detail about Bees, Wasps, Yellowjacket, and Hornets. How do they look? Where they live? How to deal with them. Will they sting? Etc. You can get all the details in this post. Just stay us till the end to get enough details. Let’s gets started!

Similar to Wasps, bees fly to get nectar and pollen from flowers. They are social insects. 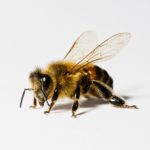 They make colonies to live. Honey bees have larger colonies then bumblebees. Both colonies have a single queen bee. A colony has 40 to 1000 bees. Usually, bumblebees feed on nectar same like honey bees.

Another type of bees is carpenter bees. They are small in size having yellow and black color hairy abdomen.

Like honey bees, bumble bees have an adorable appearance. Bumblebees are more fuzzy buzzing bees then honey bees having flat and furry yellow and black lines on their body. Their body is covered with soft hair.

While Honey bees have black and brown lines on the body, they are smaller than bumble bees. Both bees have two eyes along with a pair of antennae. In front of their mouth, both have sharp mandibles.
Read Also:How to Get Rid of Bumble Bees Easily Best Methods – Bumble Bees Facts

Carpenter bees are lightweight. Their abdomen is black and yellow.

Carpenter Bees – 7 Effective Ways to Get Rid of Them

Where Do Bees Live?

As both bumble bees and honey bees have fuzzing nature. Typically, they likely to live far away from humans. Both make hives to live to have a single queen bee. Bumblebees have smaller colonies than honey bees. Bumblebees usually make underground colonies while honey bees are usually live on trees.

Carpenter bees are attracted to dry bare woods. These bees can’t eat wood but can cause damage to the wooden structure by making holes in it. Unlike other bees, carpenter bees don’t live in the colonies. They make tunnels to stored their eggs and protect pollen larvae from surviving in cold temperature.

Bumblebees have powerful, painful sting than honey bees. They can sting you at multiple times. But honey bees are gentle. They are not as threatening as bumble bees. Honey can sting just in once.

Whereas carpenter bees can’t sting you. If they are hovering around you, then these bees are harmless to you.

Sweat Bees Facts – 7 Ways to get rid of Sweat Bees

Very aggressive insects among all insects. Yellow jackets are similar to wasps. They are 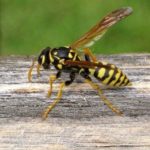 mostly found in the United States. They make colonies up to 40,000 yellow jackets.

Yellow jackets have yellow and black stripes on their body. They have six legs, wings and a pair of antennae. Unlike other bees, they don’t make honey.

Yellow jackets likely to live where humans live. They make their colonies in dark and cold places, underground nests. They are social insects and active in the day time.

Yellow jackets are dangerous and can sting your multiple times. They can inject infestation in you if they are around you. Their venom can cause allergic.

Wasp life is not more than a year. They have almost 4000 kids in the United States. They

are hovering in daylight band return to their nest at dusks. They are active in the mid of summer and early fall. A queen bee remains life in winter, and all the wasps will die off.

Wasp is the only insect that has a flat body having a pair of wings. They are large than honey bees.

Wasps make their nests near humans like on the roof and above ground. So, they can readily sting.

Wasps are aggressive and can sting you as many times as they like. They have hurtful sting rather than dangerous. Red Wasp – How to Get Rid of Red Wasp.

Hornets have two types’ Bald-faced hornet, and European Hornets both belong to Vespidae. 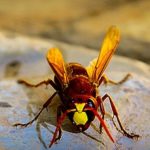 Bald-faced hornets make their colonies on the top of trees, building, and bushes. A single queen starts living in the middle of the nest and laying eggs in every spring then gradually hornets expand until the nest size become larger than a basketball at the end of the summer. The queen hornet always protected by workers.

European Hornets are like to make a nest in hollow trees. You can also find them in hollow areas of the house roof, in barns and shades. They built a nest on insecure places like tree limbs. By building a nest, they use wood fibers shell around their nest to protect themselves. As winter starts all hornets die off except the queen hornet. It finds shelter place in empty logs to spend the winters.

Bald-faced hornets have a smooth string, so they sting anyone or anything. They can sting again and again that cause allergic reactions. As they are aggressive, their sting injects venom to host that will hurt you more and also itching you.

Both bald-faced hornets and European hornets have a smooth string that can cause sting over and over. Their sting can hurt, itch you, and cause allergic reactions.

These Insects Are Bad as You Think?

As I told earlier these all insects sting once or most of them in multiple times. So, their sting is painful, which can cause allergic reactions, itching, selling, etc. But they are not as dangerous as you think. You can get some benefits from them. Like honey bees make honey, which is very useful and healthy to humans.

Wasps and yellow jackets are likely eating grasshoppers, spiders, and other insects. So, they are acting as a natural cleaner to get rid of other insects.

Bee is a source of beeswax. So, a human can get benefits from them.

Preventing Sting If You Get Stung

If you get stung by bees then don’t scratch on it; otherwise, you will get more venom. You should scrap the skin from a fingernail or butter knife. And if you get stung from hornets, wasps and yellow jackets then it will cause itching, allergic and swelling.   There are some simple sting remedies. You should try if you get stung:

If you get stung by these insects then here, I am going to tell you some tips to prevent them. You should follow then to protect yourself and your homes, yards, plants, etc. Let me tell you some steps for preventing stings. These instructions are pretty simple to follow:

Yellow jackets, wasps, bees, and hornets are tiny social creatures having almost the same physical structure, but they all are an act differently. Bees are gently and normally far away from humans, while hornets and wasps are usually like to live near humans.

Bees sting you once while other insects sting again and again. Overall, they are not as bad as human consider them. But if they sting you again and again, then it can cause allergic reactions. In this case, you can try some home remedies that are listed above. You can try any one of them if you get stung.

If you are interested in getting more updates, then keep visiting us. Stay in touch!

What Is the Difference Between Wasps, Yellow Jackets, Bees, And Hornets?

Wasps are not yellow jackets, but mostly yellow jackets are wasps. While bumblebees are the same as honey bees but honey bee makes honey and can sting you. Hornets are more significant than wasps. They both belong to the family Vespidae.

All these insects have short life circle. They can live a few months not n=more than a year. A queen bee can live up to five years.

Are Bees Different from Yellow Jackets?

Yellow jackets similar to wasps but they are more aggressive, so they are not like bees at all.

Are Wasps Dangerous to A Human?

Not dangerous, but if they sting you again and again, then it can cause allergic reactions because their stings are painful rather than dangerous.