Wasps are small winged insects, with stripes and a stinger. Their scientific order is Hymenoptera. Many different species of wasps belong to this order. A wasp’s life cycle is usually short and seasonal. Most of them do not survive more than one season. They are usually found in abundance during hot, humid summers.

In this article, we will tell you about types, life cycle, sting/bite, symptoms of wasp bite and necessary preventions for wasp bite.

A wasp’s life cycle consists of the mating of a sterile male and female wasp. This leads to fertilization and laying of eggs. The next step is the hatching of the larva. When sufficiently fed, the larva develops into a wasp. This is how the life cycle is continued.

Wasps have different species. These small winged insects are divided into two broad categories of wasps based on behavioral actions.

The social wasp (scientific name: Vespidae)has a narrow waist and a sting. It has a yellow and black striped body usually. It builds a paper nest out of wood pulp. It feeds its larvae on an insect diet. The social wasp aggressively protects and nurtures the nest. This type of wasp lives in a community, hence the name ‘social.’ Yellowjackets are the most common examples of social wasps. 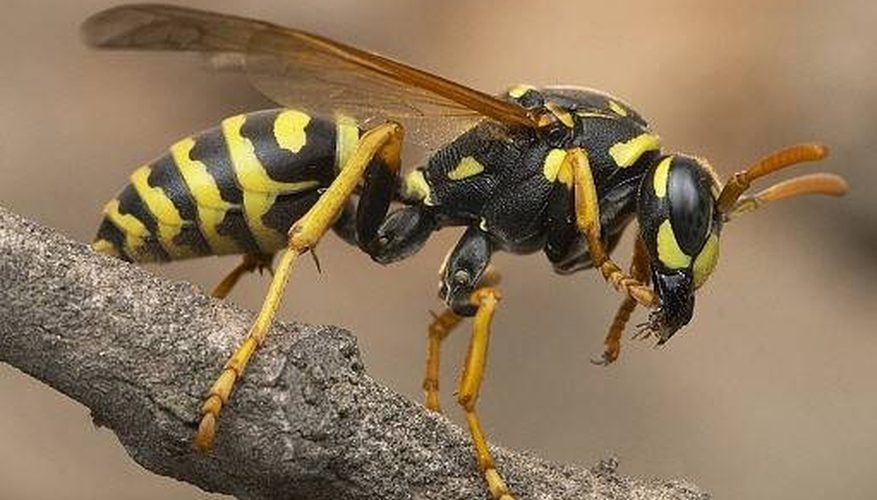 The life span of social wasps varies according to their type.

The solitary wasp (scientific name: Anoplius samariensis)has a narrow waist with distant relation to social wasps. This type includes many kinds of parasitic wasps. Such wasps lay eggs on hosts and feed off them. Unlike social wasps, they only provide food to their larvae. They do not usually protect their nests.  These wasps do not live in a community, hence the name ‘solitary.’ This type includes sawflies and horntails.

Do all Wasps Sting?

All wasps can sting and are capable of it. But not all wasps are involved in stinging. A sting or bite is their natural defense mechanism. They only do it when they feel a threat nearby or want to feed. Usually, the female wasps bite or sting. The male wasp bite is usually harmless.

The social wasp is involved aggressively stinging. This is because they have to protect their nest, eggs, and larvae. Solitary wasps live in confinement and not communities. Therefore, they are not as defensive as social wasps. They only sting when directly handled.

A wasp bite can hurt, depending on intensity and severity. Most people suffer mild to moderate reactions to wasp bites. This includes common symptoms like redness, rash, swelling, etc.

What does a Wasp bite/sting do? Is it harmful?

Wasps have stingers for a defense mechanism. A wasp sting can either leave a lodged, intact stinger on the sting site or otherwise just a bite mark. In any case, instant pain and irritation are experienced. The wasp stinger has a poisonous venomous substance that can infect and cause a severe reaction. This usually occurs in people sensitive to a wasp bite.

Red Wasp – How to Get Rid of Red Wasp

When a wasp’s venom reaches the body, it externally leaves a punctured wound mark on the body. Internally, it goes into the bloodstream. This causes a welting, swollen mark where bitten. In the middle of the wound site, a tiny white mark may also be present. The swelling usually subsides within a few hours to a week.

In severe cases, a wasp bite or sting can cause cell death, infection, etc. leading to the death of the individual. So, the wasp bite can be extremely harmful in case sensitive individuals.

The symptoms of a wasp bite or sting can be extreme for people allergic to wasp bites. Following is a list of common symptoms experienced after a wasp bite:

These reactions range from common to severe cases. Symptoms may vary in different individuals. A person may experience 3-4 symptoms at least. This is based on the body’s reaction and the immune system.

If you or someone at your home experiences a wasp bite, do the following steps. Wash the sting with soap and water to remove venom. Use a cold pack to lessen redness, rash or swelling for the time being. Pat-dry the wound and do not let it get infected with water, once dried. Use a bandage for the sting bite if needed. Take over-the-counter painkillers if you experience unbearable pain.

In severe cases or pain, you should immediately seek a doctor. Tetanus injections usually serve the necessary action. Topical solutions like creams or lotions can also help ease the pain and swelling.

Depending on the severity of the bite, various actions can be taken in any case. Less severe, mild and moderate wasp bites can be treated at home. This involves preventive measures to stay safe from a sting. Some helpful preventions are listed below:

A wasp’s life cycle does not necessarily depend on human blood. But a wasp bite or sting can be extremely dangerous if not cared for properly. Take the necessary steps and precautions to avoid a wasp bite. Seek medical advice immediately if the pain is unbearable.